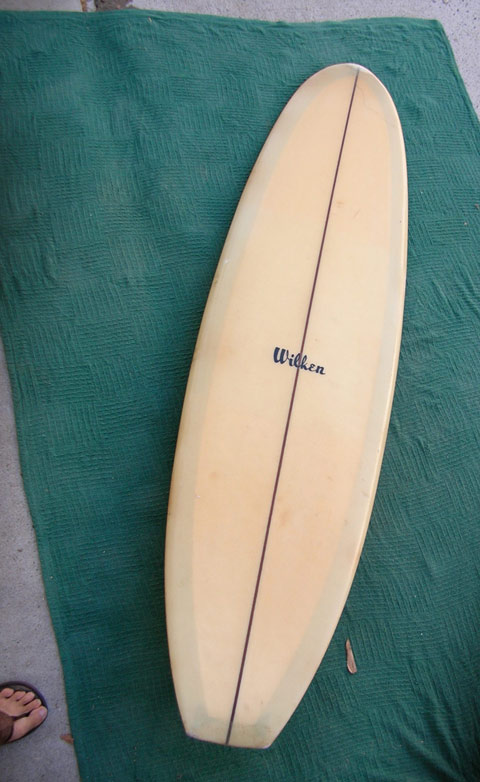 I recently got a request to send out a W.A.V.E.set fin box adapter to the owner of a Wilken midlength board from the late '60s. More specifically, a 7'0" vee bottom with a WS box.

Excited to try out the adapter. I have a Wilken 7' vee that will benefit from some fin diversity. I love waveset, but they're not the most versatile!

So another one goes out the door and into the water, woohoo!

This got me thinking about boards I have owned and let go of. Yeah, another "one that got away story"... but it's a good one, I promise!

When I had LambrettaWorks I stored many of my boards by hanging them from the ceiling inside the shop.

When I ran out of square footage at about 10 boards, I started using up cubic footage by stacking them up. This meant that the longboards were almost always on the bottom of these board pyramids, and the shorter boards didn't get seen as much. The Wilken in these photos is one such board.

I have no idea how I acquired it. Perhaps I got it in trade for some work. Sometimes people just donated boards to me.

I do recall trying to ride it once, sometime around 2009, probably in September when these photos were taken. It was far and away the squirrelliest thing I had ever tried to ride. In fact I recall it being a disaster. I would love to try one again after having more experience under my belt (wetsuit?) with various vee bottoms and transition era boards.

By this time I had started selling stuff off, and this one went bye-bye to some lucky soul via Craigslist, probably right after taking these photos. If I remember correctly it was around 7'4", maybe 7'6". Sure wish I had this board now. Back then midlengths were the forgotten children of surfing's history and could be found pretty cheaply, even free. This isn't so much the case now.

So yeah, I'm looking forward to some feedback on how the adapter works in that Wilken!

While going through old footage in preparation for a historical ASRA documentary film I've started p...

V is For Vee Bottoms!

This Changes Everything! (or at least that's the plan...)

My goals for this project are simple: create the proverbial "one board quiver" create the most e...