More Fun with Surfboards and Lambrettas

Going through my old photo library I found this picture that really shows off the inside of the old shop, including a nice LD MkIII Lambretta and some of the old surfboards I used to have.

About the Blue and White Lambretta:

This thing is about 95% finished after a frame off restoration. It probably came to our shop as a rusty pile of junk! One of the telltale signs that it's not entirely done is that there is no rubber beading on the frame where the side panels go. The panels are probably waiting for the grilles from the chrome shop, or maybe brand new grilles are on their way from Italia...

There is also no handlebar/horn cover. If this were an earlier LD (pre-'57 Mk.III model), it would have the horn mounted below the headlight. Skip forward if you're not a Lambretta geek... hehe. 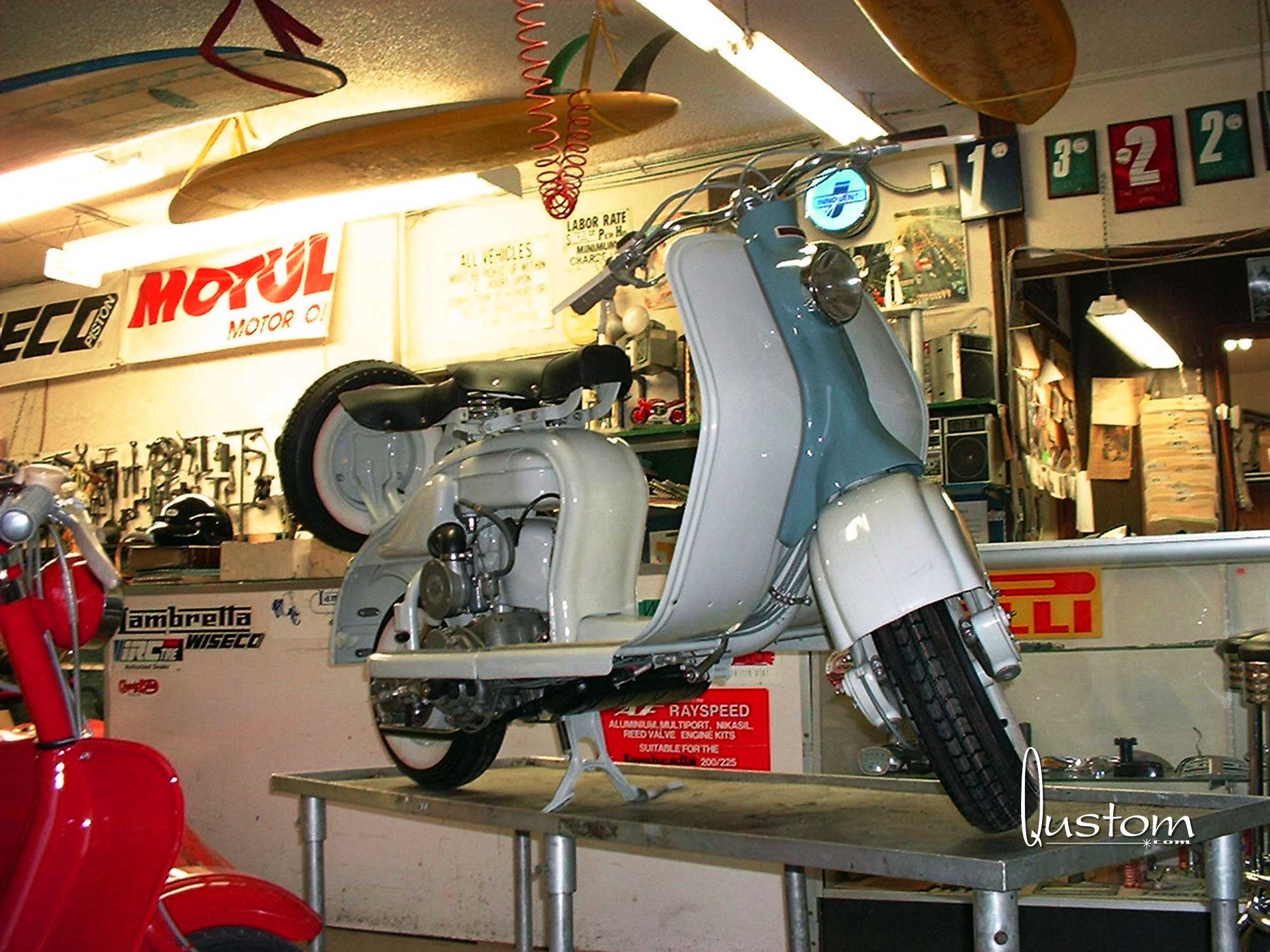 About the red Lambretta in the foreground:

That's my "Giro d'Italia" model. At least that's what I was told by the guy I got it off of, in much rougher shape than you see here. I worked on that thing for months on end (or was it years on end...?) to get it to this condition. It was a real joy to ride, one of the few three speed models I ever rode that could actually accelerate after the 2nd to 3rd shift.

I spent countless hours on the paint job. It had probably 3-4 coats, maybe more on some parts, with lots of wet sanding in between to get that gloss. No clear coats needed, just single stage enamel with some gloss hardener and lots of elbow grease between coats. Hard to beat that finish!

I really wish I could recall what the yellow single fin board in the middle was... I want to say a '70s G&S, but I'm not sure. I do remember it having a domed "S" deck, with lots of nose rocker but a really flat belly and downturned rails. I think I tried to ride it once or twice and flailed pretty badly. I wish I had it now, I'd love to give it another go!

Sitting on top of that board is a kneeboard with a really cool glassed on Greenough-ish green single fin. It had really hard down rails and a scooped out deck. This one had a few open wounds and never saw the water while I had it.

The board on the right was a crazy pintail that had been reshaped from an old '60s log. I wish I had more pics of it. Maybe they will turn up somewhere. I remember it having about a 1" stringer and some really crazy cloth inlay on the deck.

On the left was the first brand new longboard I ever bought, courtesy of Bob's Mission Surf. Looking back to 1995, I remember Bob wincing a bit when I chose to lay my hard earned cash down on this thing. I bought it for two simple reasons: 1) I dug the graphics (Really.), and; 2) I wanted a board with lots of "rocker" so I wouldn't "pearl", which up to that point in my short surfing life was my best maneuver.

In addition to an absolutely crap glass job, the shaper of this barge had quite obviously never met a straight line he couldn't warp. The thing had nose-to-tail banana rocker and not even an inch of parallel section in the outline... like one giant Pringle. Despite being 10'0", it paddled like a ferry to Coronado, and it surely set my surfing back a good ten years or more. Luckily it fell apart before it could ruin me forever.

About the placards and other stuff:

The number plates in the upper right were ASRA seasonal racing awards. We had so many trophies in a case at one point that we had to ditch many of them, though we made sure to keep any of Chris Rogers' around for posterity's sake. We also won a lot of awards for our restoration work, which looking back on it was every bit as gratifying as the racing accolades we garnered.

Anyhow... that's enough blather for one evening, but I am looking forard to posting more stuff from the "Good Ol' Days"...

Now this is what I'm talking about

Vesparados Endless Summer Rally Patch from 2002 (click for larger image) I found this patch while ...

People Riding Surfboards with Vees in Their Bottoms

1968 Surfboards Hawaii 8'0" Vee Bottom It's going on five years since I bought this board at Bird's...

Like many other San Diegans I spent a gorgeous Sunday morning yesterday at the beach: surfing, hangi...

These shots are from the really early days of my Lambretta adventure at the family garage in Lakesid...