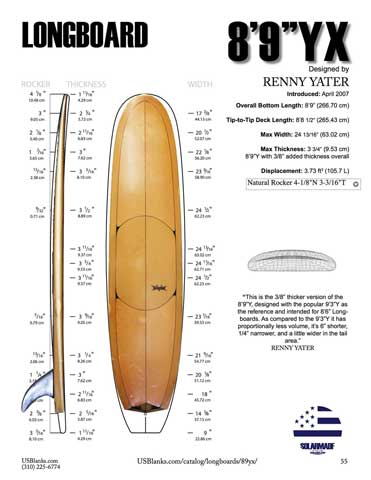 This Changes Everything! (or at least that's the plan...)

My goals for this project are simple:

Surfboard design, like many things, is a process of give and take, of exploring limits and then finding a middle ground that works best for any given set of conditions. Our shared liquid playground offers an infinite set of variables that seem to make building the perfect board an impossible task. Factors such as swell direction and storm proximity, wave height, pitch, speed, smooth or choppy surface conditions, lefts or rights, ocean floor contours, beach breaks, point breaks, reef breaks, flat faced or hollow tubes, undercurrents and rips, winds and tides all combine to determine the type of surfing and surf craft that is best for the current conditions.

And just as wave conditions depend on infiinite combinations of the above factors, board design also offers an infinite combination of rail outline, rocker, thickness, fin type and placement, rounded hull designs or concave(s), and so on, each combining to form an overall riding experience that hopefully allows the rider's skill level to shine through in whatever conditions exist at that moment in time.

Even moderately experienced surfers know that the more rocker a board has and the curvier its outline, the better it will turn but the slower it will go in a straight line. Conversely, a very flat board with a straight outline is going to travel like a missile through the water, but good luck turning it without stomping on the tail to slow it down and then really cranking one rail into the water. See Ryan Burch's experimentations with finless chunks of rectangular foam at about the 7:00 mark of this video for example.

The genesis for the idea of this project came from three sources:

At some point after riding both of these boards for a couple of years, things started to gel in my mind like so much resin going off. Why not build a board that incorporates the best quailities of both of the above designs? After all, the Russell rides like an 8' board, and the v-bottom just happens to be 8'0" with a really nice outline, despite the ridiculous tail shape.

I researched various options for wood and settled on cherry wood. I discovered that when George Washington laid his axe to it, he found it to be quite strong, with tight grain and fairly light weight. A quick trip to TH&H Wood got me the goods, then it was off to my good friend Shawn "Chuk" Woolery's shop to rough it out.

After I had gotten it shaped the way I wanted it, it weighed over 3 lbs., so next up was some chambering to get the weight down. Many hours on the mill later, I had gotten it down to a little over two pounds... not bad! 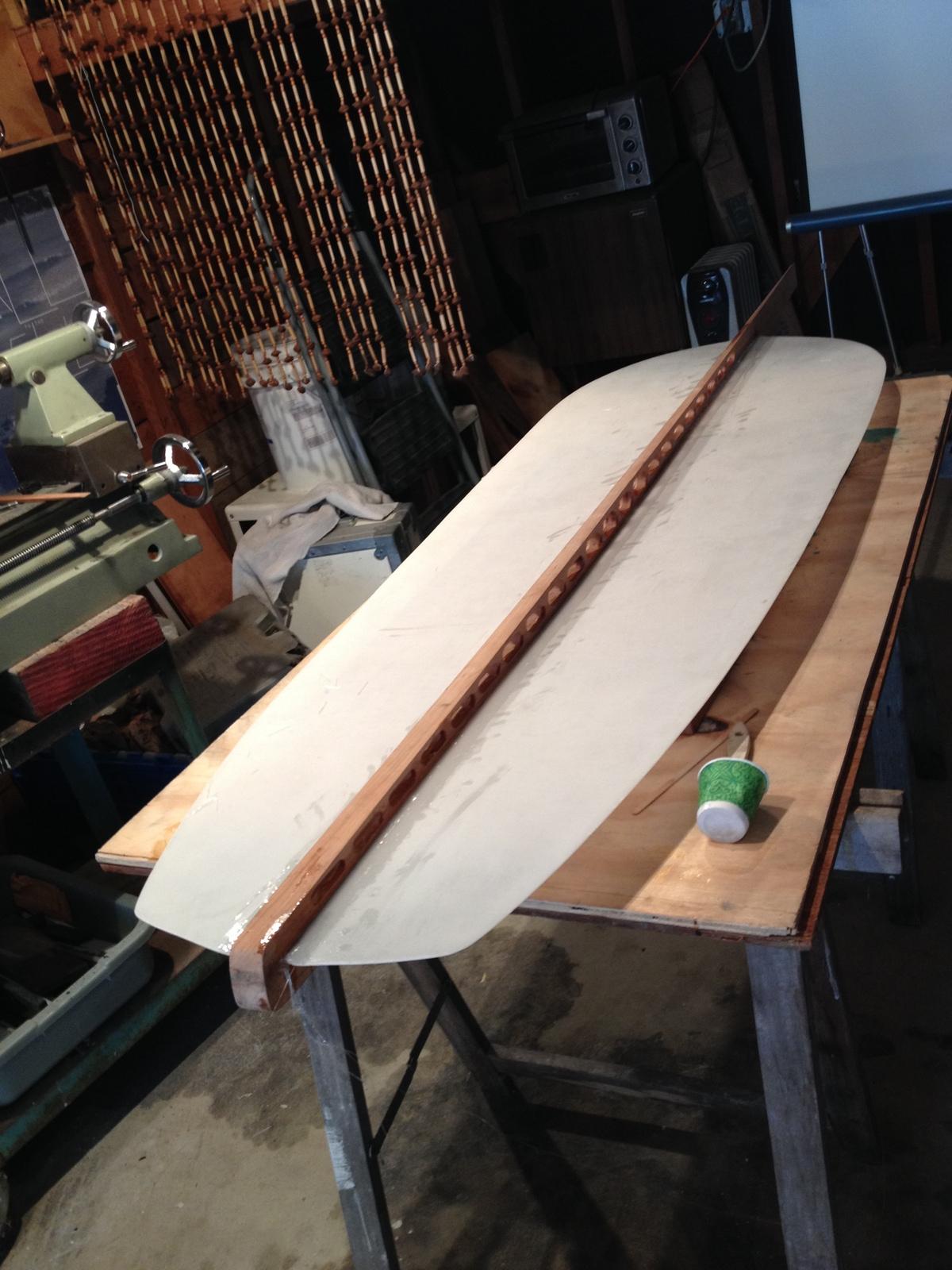 But what about the tail?

I wanted to experiment with some vee at the back, but a lot less than the SH, and with some double barrell concave instead of the rolled bottom and all that foam that makes the board so squirrely to ride. On the other hand, I really like how the SH rides from the middle forward, including its noseriding ability thanks to its flat bottom up front.

The holy grail: a board that hauls ass AND turns on a dime

At some point it occurred to me that if I was going to use a tapered stringer, it would offer a perfect starting point to incorporate some radical yet responsive flex into the tail - but instead of the whole board flexing, only on the inside rail during a turn. I decided that I could achieve this by going with a much softer material than polyester resin in the rear half of the board, so I started researching the possibilities. What I came up with is polyurethane, similar to what skateboard wheels are made from. It's quite strong and much more flexible that polyester resin or epoxy.

However, I knew that this would be quite fragile without some extra support, and then it struck me that I could incorporate an internal fiberglass wing inside of the foam to add some strength and torsion. The three surfaces (two outer polyurethane layers and the one internal fiberglass layer) would act together like the springs and shock absorbers in car or motorbike suspensions. In a traditional board design with just a polyester resin shell, acheiving any radical amount of flex is akin to asking a hard boiled egg to bend - it's gonna break apart really quick. 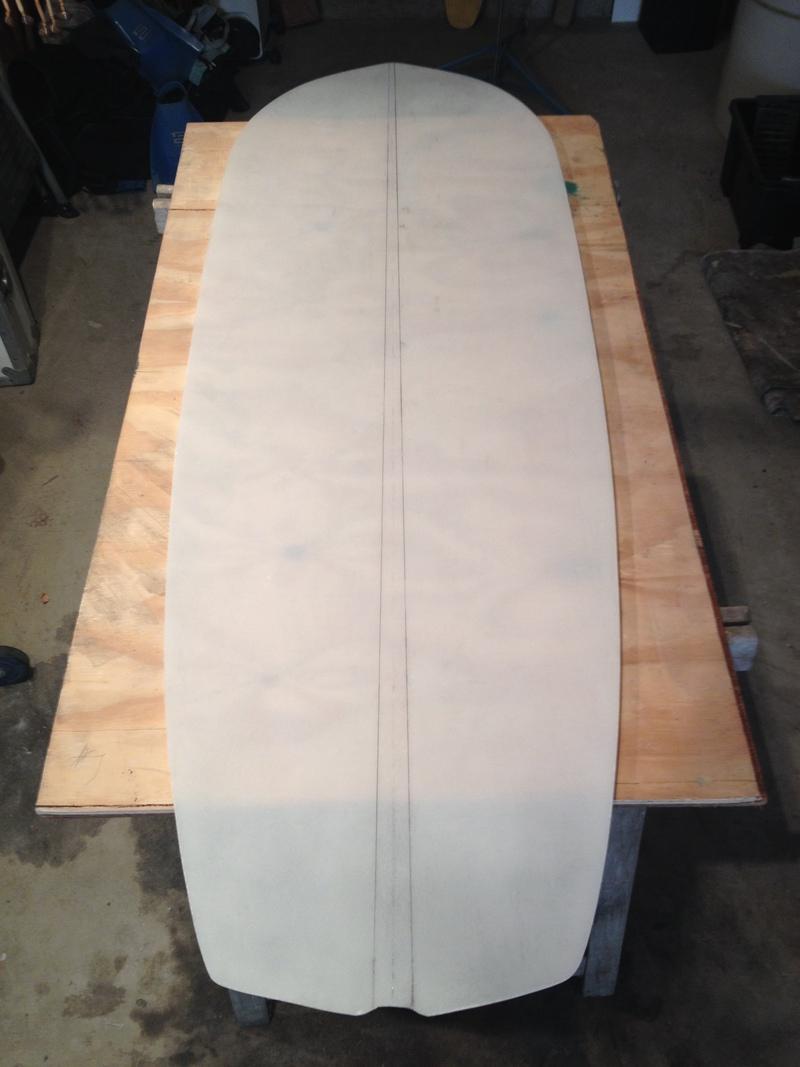 So my plan was to take advantage of the flexibility of the polyurethane and let the internal wing handle much of the shock abosrbing and load bearing forces. I'm pretty excited about where I can go with this, and my only hurdle now is how to get the deck strong enough at the rear to take the force of the rider's feet without denting and rapid failure such as delamination or who knows what.

One of the solutions may be to thread some very light and stiff material through the weave of the cloth before I laminate it onto the tail. I already plan to lay the cloth out at an angle relative to the rail to allow the weave to expand and contract within the polyurethane. The extra stiffness I need may come from glass fibers woven through the cloth (8 ounce Volan) that lay out parallel to the rail (or more precisely in parallel arcs to the dividing line between the nose and tail areas in this picture:

The stringer is the fin box

Another feature that I'm really stoked on is the idea of having the finbox incorporated into the stringer. I'm not sure how or when I came up with this idea, other than just visualizing having to router in a space for a box after the board is laminated as is usually done, and thinking "why not just do it right in the stringer?" This turned out to be quite a chore on my crappy little table top mill, and a mistake caused me to have to redo it longer, but the end result is that now I'm going to have 14" of fin adjustment to play with! 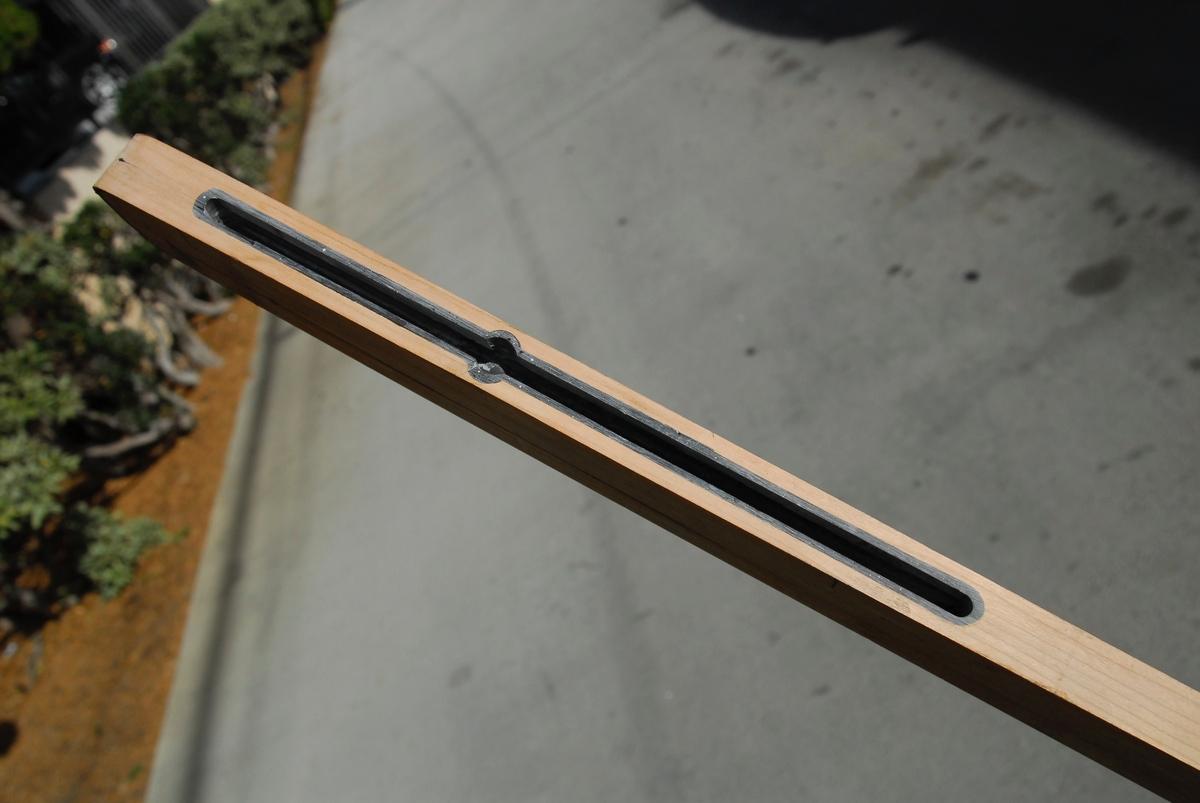 Next up came slicing the blank horizontally to allow insertion of the internal wing. This turned out to be a major hurdle that was partially solved by building a hot wire cutter attached to a printing press! I will let the pictures tell the story here, but the postscript is that I could never get the wire hot enough with materials I had at hand, and I ended up just cutting it with a hand saw instead. Still, the printing press was a huge help in holding the blank steady while I made the cut. After many weeks of wrangling with this job, I finally found a solution - whew! 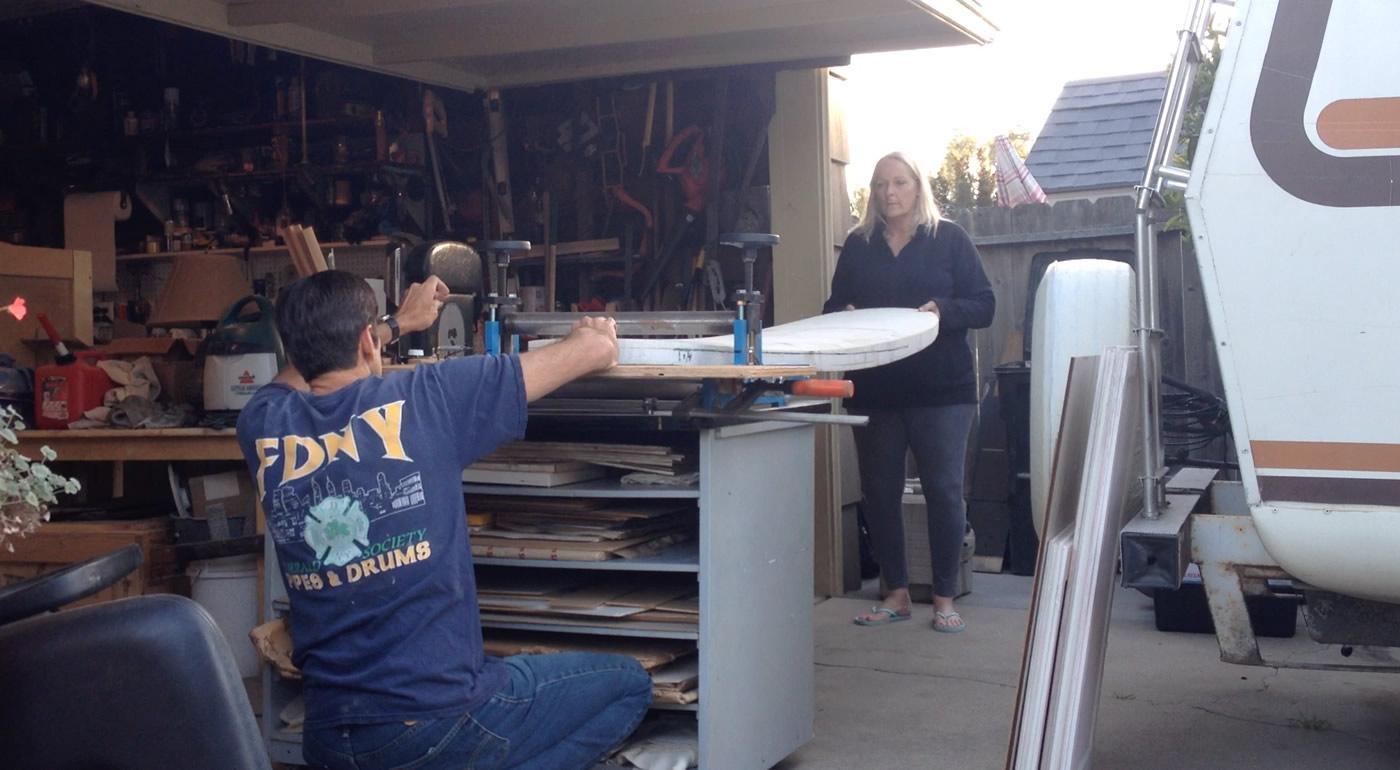 So now as of this writing, I am at the stage where the blank is roughed out, the stringer and wing fit inside as planned, and I'm getting close to the final assembly stages. I'm hoping to have it finished by next weekend for the Shaper Studios Self Shape contest at Seaside Reef. 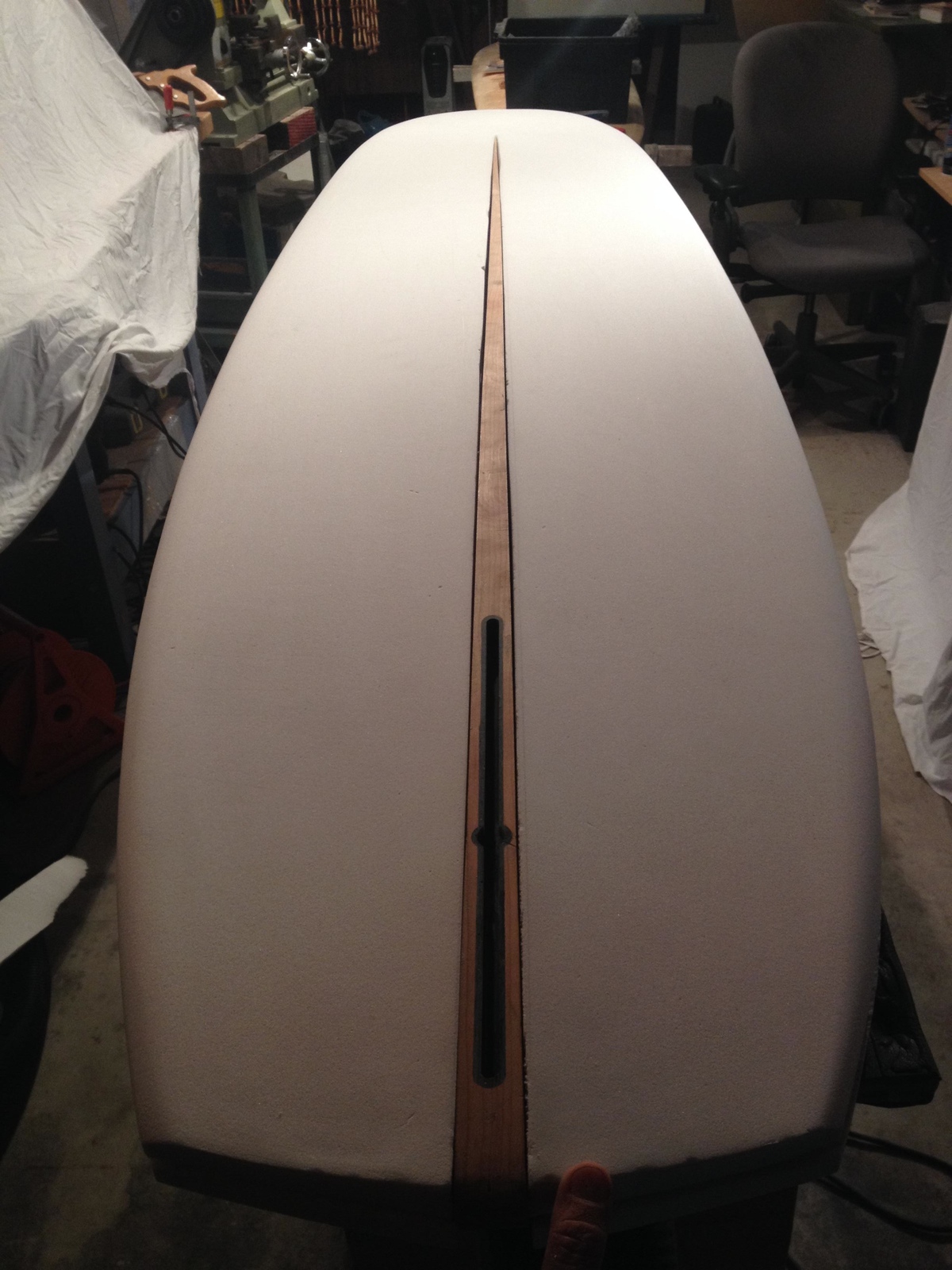 Anyhow, if you've read this far I thank you for your interest, and feel free to leave any comments below! I'm excited to get this thing in the water soon!

A little while back I got a random but very welcome email from a young lady named Lainey who is the ...